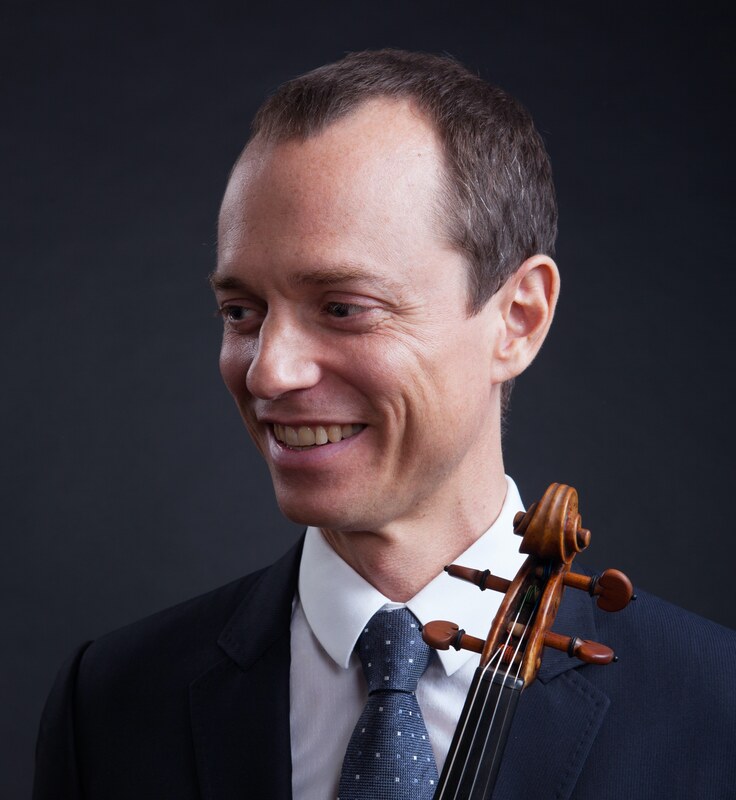 About Me
Click for professional bio
As a kid, I really wanted to play violin. I got my wish, but when I was told I’d have to practice 30 minutes a day, I really wanted to quit. One thing led to another, and before I knew it I was obsessed with playing and listening to the violin. 47 years later, I’m still obsessed - not just with violin, but with the language of music.

My parents were both violin majors at University of Wisconsin in their hometown of Milwaukee. My Dad went on to earn his MM and DMA and various college teaching jobs, so we moved frequently. I got my first real (tiny) violin when I was five years old, and both Mom and Dad gave me lessons. Just before I turned six, I performed “Jingle Bells” at my school with Dad. We played it again at a home holiday gathering, and Dad captured it on tape. Can you tell which one is me in this recording?
​Click below to listen.
My older sister played piano and violin, and took ballet lessons. At a certain point she became serious about ballet, and was allowed to quit violin. I thought that wasn’t fair, so I was given a chance to take ballet lessons as an alternative to violin. That probably lasted two weeks. I guess I really liked the violin!

My younger brother started on piano, then violin, and finally cello. In those years we always had some musical combo around the holidays. 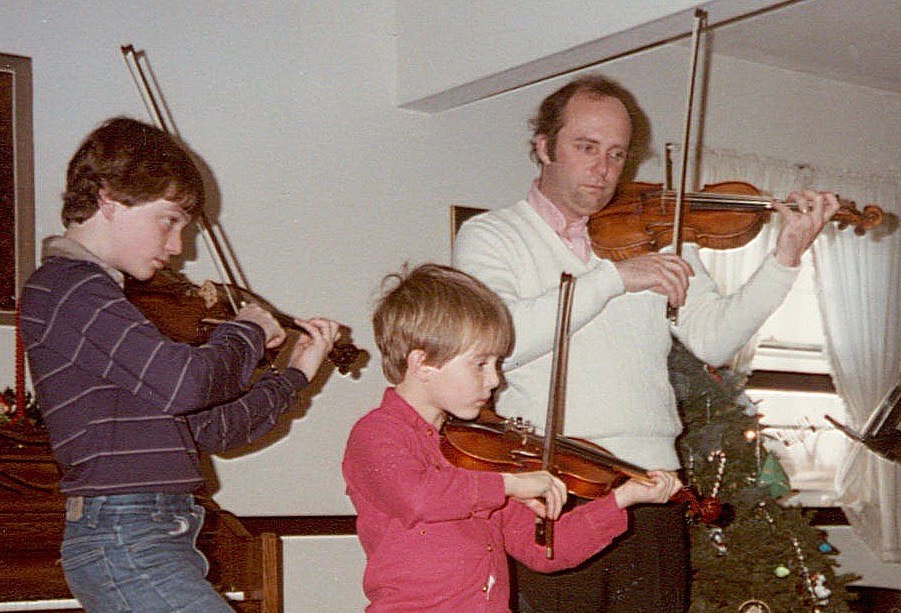 Garrett - age 10, brother Glenn - age 5, and Dad (with good form and posture)
​I grew up surrounded by classical music, but as a kid I listened mostly to hard rock and heavy metal bands. At some point I started digging through the classical LPs we had at home, and made an abrupt shift. I fervently devoured all the Heifetz, Milstein, and Oistrakh records that my Dad had collected. Working my way through the record collection, I discovered Beethoven’s Late Quartets. Those otherworldly sounds blew me away. 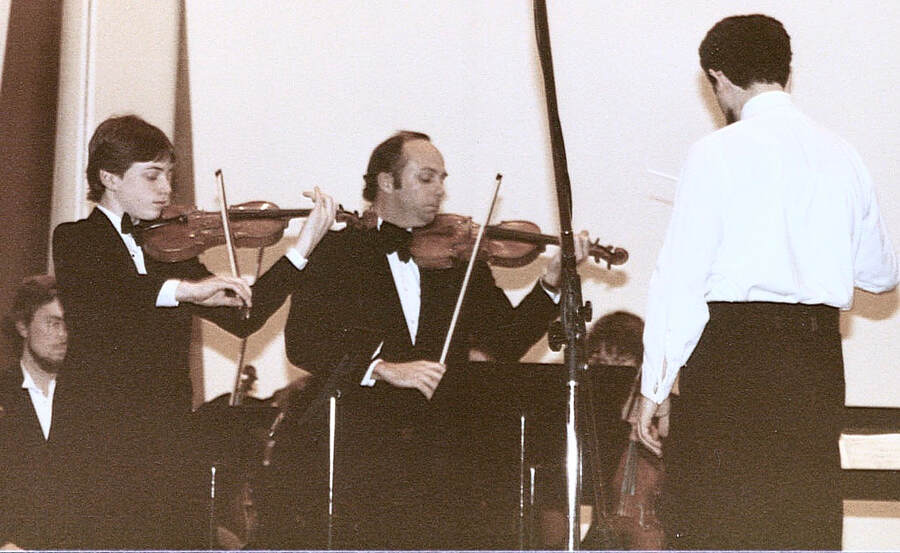 Garrett - age 12, performing the "Bach Double" with Dad in Milwaukee
At age 13, I played in a masterclass for the cellist George Neikrug, who had studied for 15 years with the legendary pedagogue D.C. Dounis. Neikrug was born in New York City in 1919, grew up watching Kreisler and Heifetz live in concert, and later played Principal Cello in the Hollywood orchestras. Neikrug’s passion for teaching and his direct connection to that golden era of string playing lit the fire in me. I spent all my summers from age 14 studying privately with Neikrug, practicing 7-8 hours a day (that’s way too much, don’t do it!) - I will teach you how to practice more efficiently.

After a “gap” year making a living busking in the subways of Boston, I enrolled as Neikrug's only violin student at Boston University (yes, my violin teacher was a cellist who studied with D.C. Dounis, who was a medical doctor, violinist, and mandolin player). 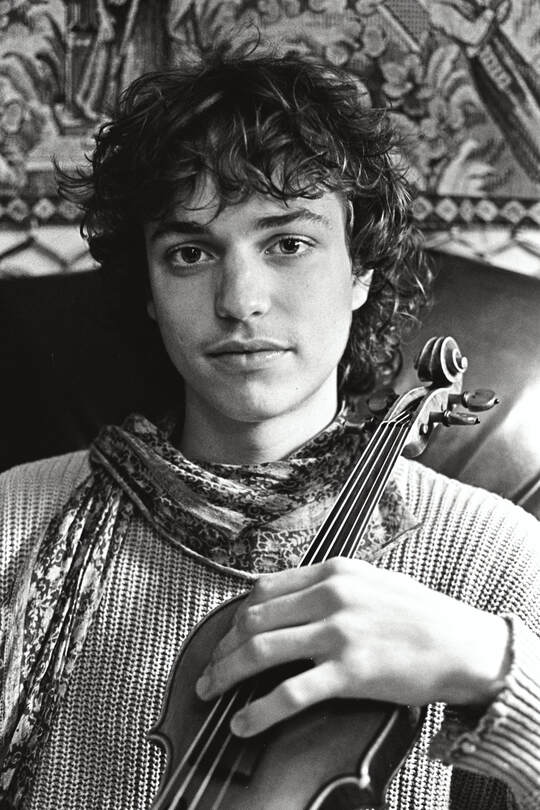 Garrett - age 18 - busker
As a teenager, I was fanatical about collecting recordings of legendary violinists such as Kreisler, Elman, Heifetz, Milstein, Oistrakh, etc., but there was one violinist who eventually became my favorite of all time: Shmuel Ashkenasi, founder of the Vermeer Quartet. The quartet was based in Chicago, and taught at Northern Illinois University where I had a chance to earn my Masters Degree and study with my musical idol.
​
When I finished my Masters Degree I was tired of school and wanted a job, so I decided to audition for orchestras. At age 25, I won my first job - National Symphony Orchestra in Washington, D.C. My parents were living in Maryland near D.C., so we were thrilled. 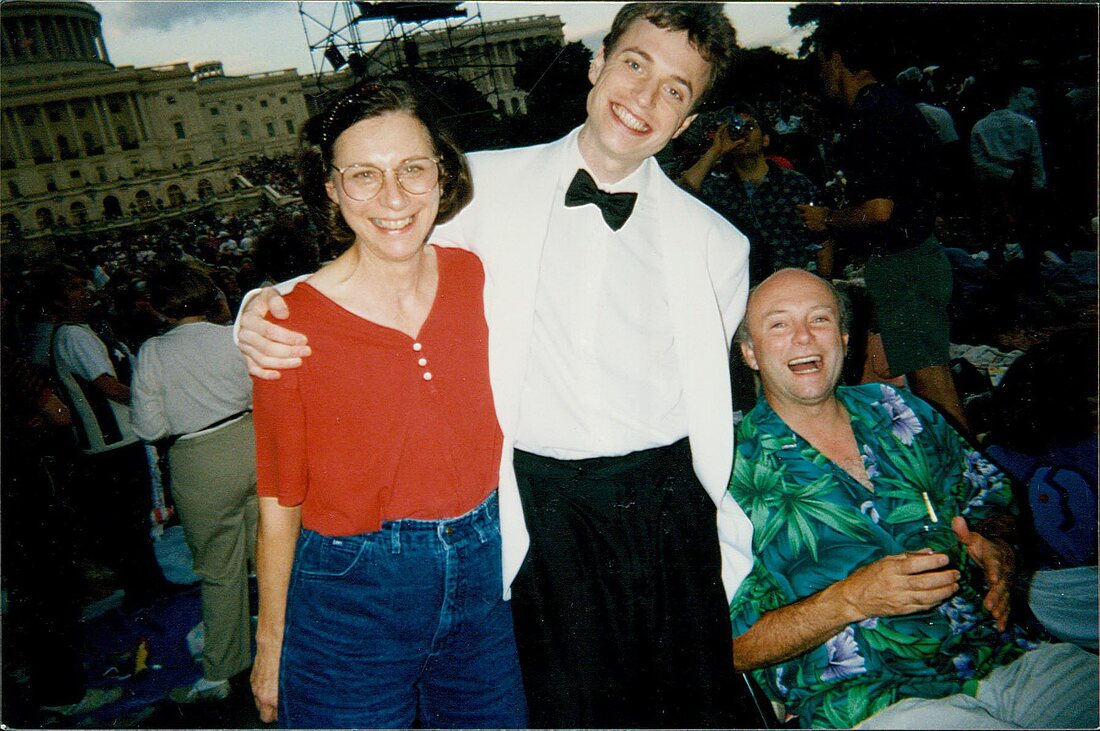 With my parents - July 4, 1996 - National Symphony Orchestra Concert at the US Capitol
Halfway through my first year with NSO, there was an opening in the San Francisco Symphony. I couldn’t resist - I auditioned and won the job. After finishing the 1995-96 season in D.C., I moved to the West Coast.
I loved San Francisco, but in 1998 when an opening was announced in The Metropolitan Opera Orchestra in New York City, again I couldn’t resist. I auditioned and won the job!
The world of Opera dramatically changed my perspective on music. I learned the real depth of composers I thought I knew well (Mozart and Strauss), and basked in the wonders of composers I barely knew at all (Verdi and Puccini). My playing was profoundly influenced by great singers.

​While my orchestral career has been as a violist, most of my performing and teaching roles outside the orchestra have been as a violinist. I have recorded the complete Sonatas and Partitas for Violin Solo by J.S. Bach, Served as Assistant Professor teaching Violin Performance Class at Mannes School of Music, performed and taught violin at summer festivals in the US and Europe, and remain active as a violin recitalist and chamber musician in New York City. 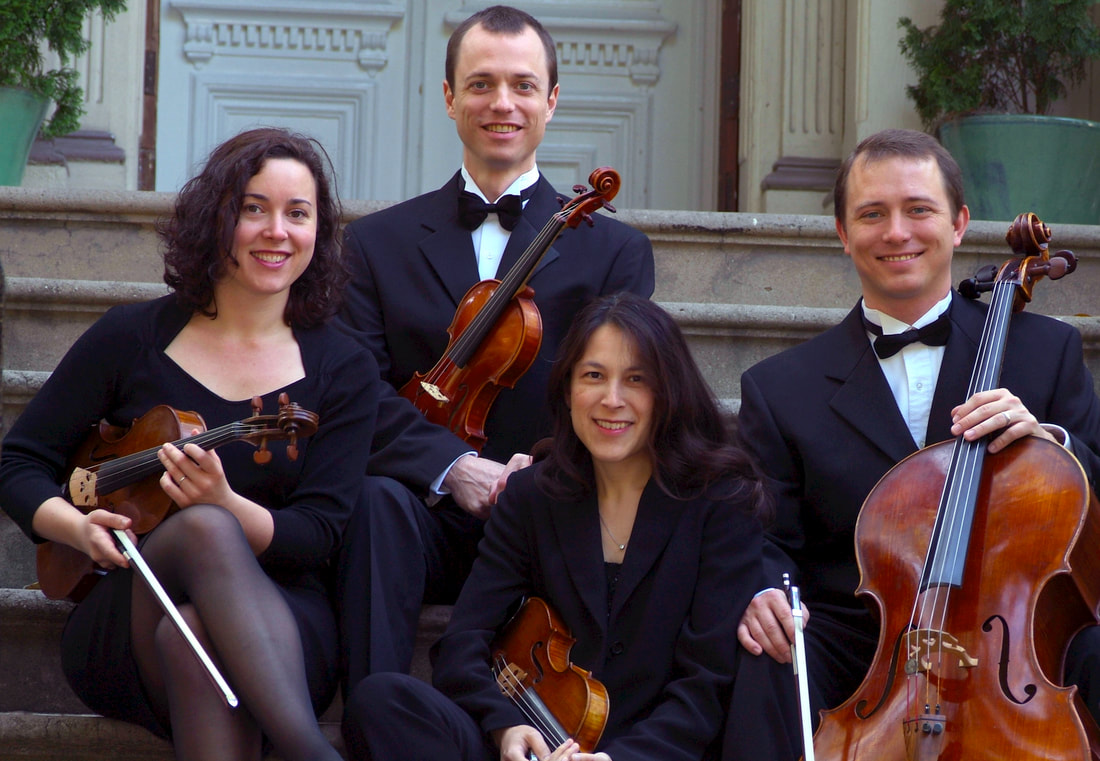 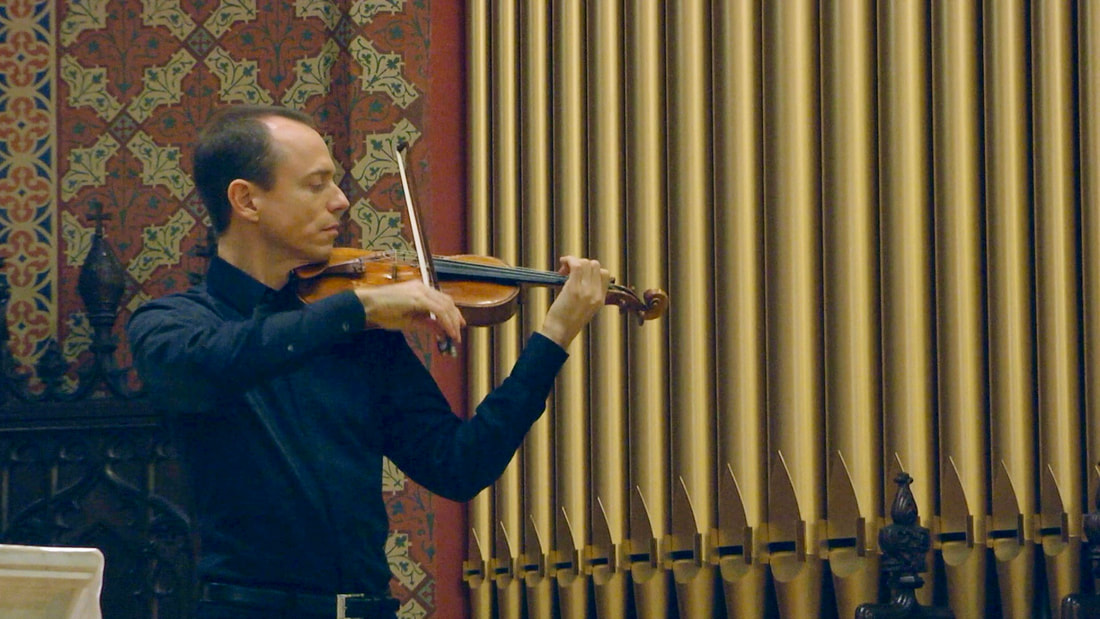 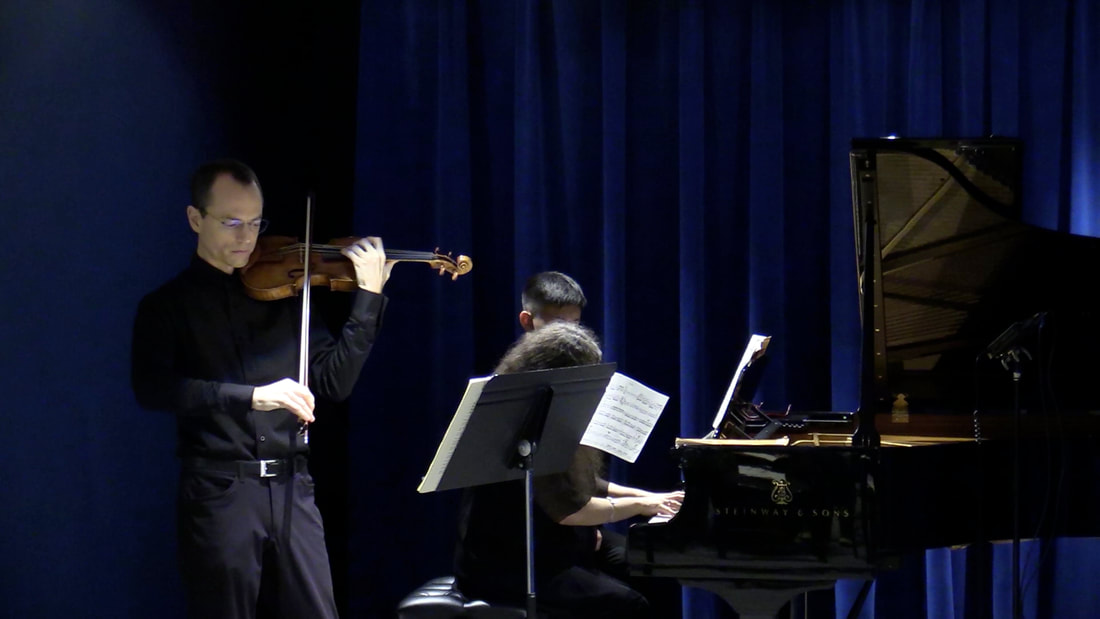 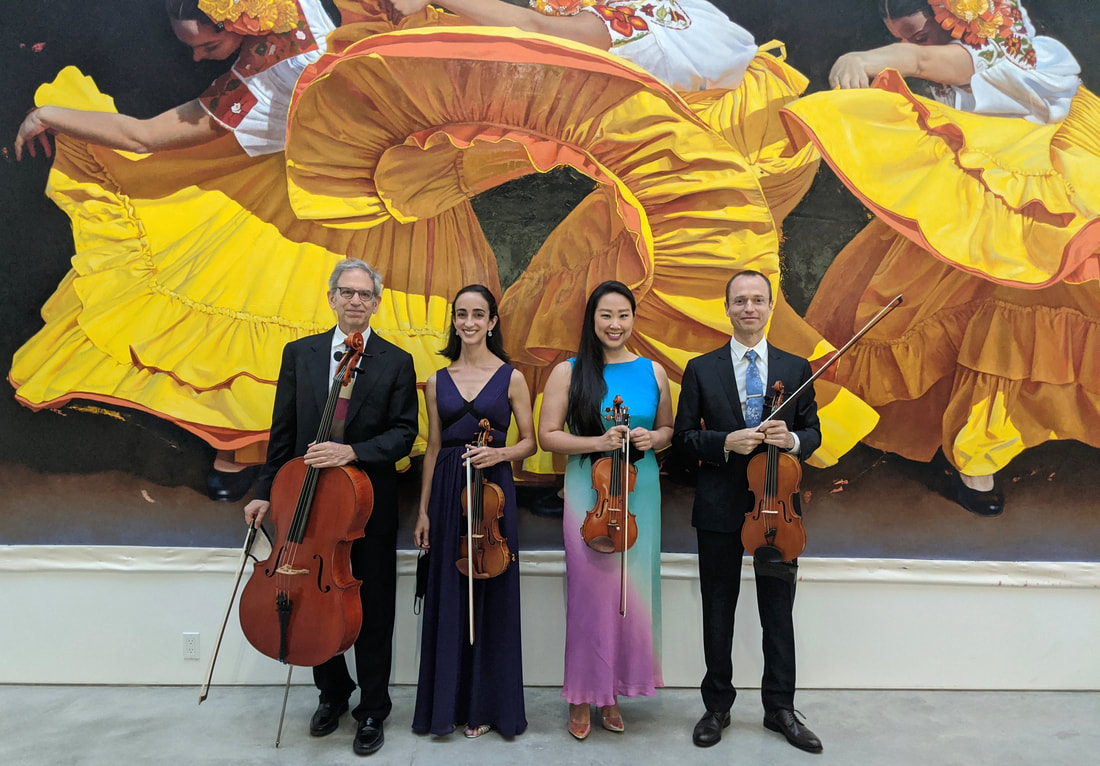 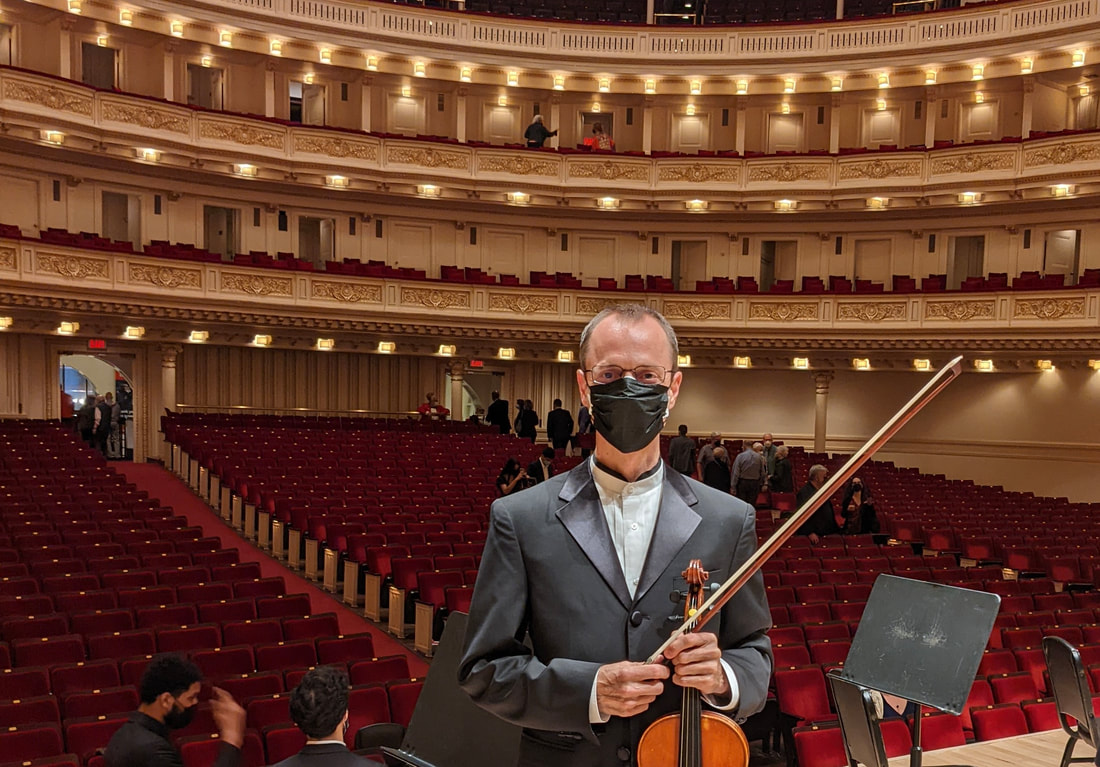 Garrett onstage at Carnegie Hall after performing with MET Orchestra - June 2022
I was fortunate to have mentors who were not only great performers, but were also fascinated with the art of teaching, and cared very much about their students’ progress and wellbeing. Like my mentors, I am a passionate and dedicated teacher, and am eager to help you achieve your goals. Visit my LESSONS page to learn more about what, how, and why I teach.
contact me
PROFESSIONAL BIO
GARRETT FISCHBACH
​Violin & Viola
Garrett Fischbach has been a member of the Metropolitan Opera Orchestra since 1998, during which time the Orchestra has won five Grammy Awards, performed regularly at Carnegie Hall, toured Europe and Japan, and appeared on  Live in HD  broadcasts to cinema screens worldwide. He was a member of the San Francisco Symphony from 1996-98 and the National Symphony Orchestra from 1995-96, and participated in Grammy Award winning recordings with each of those orchestras. His 2-CD recording of the Sonatas and Partitas for Violin Solo by J.S. Bach was released to critical acclaim in 2004.

Garrett was a college division faculty member at Mannes School of Music from 2008-2015, an adjudicator for the Manhattan School of Music Orchestra Performance Program in 2012, and is a frequent adjudicator for Juilliard Pre-College Concerto Competitions. He has performed and taught at the Sun Valley Artist Series, the Sid & Mary Foulger International Music Festival, the International Music Academy Pilsen, Czech Republic, and International Workshops in Graz, Austria.